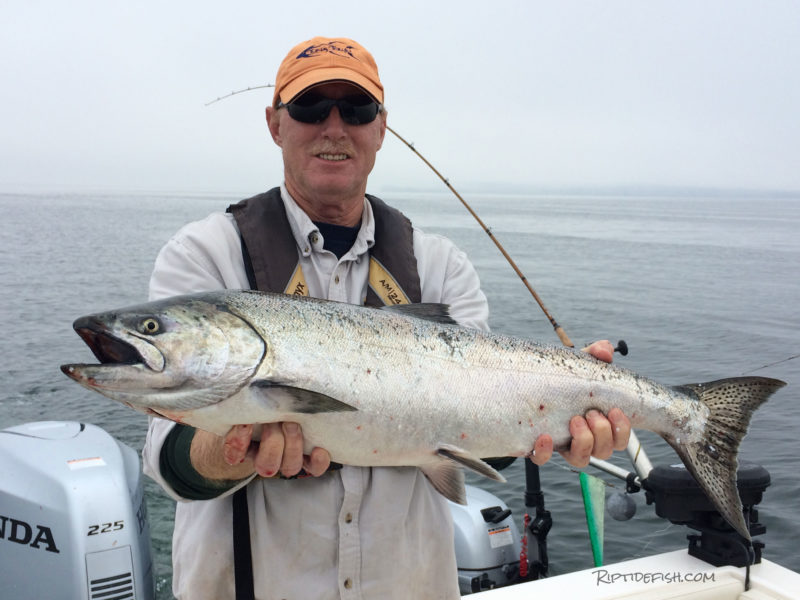 Chinook Salmon fishing can be great at Point No Point in the summer!

It isn’t uncommon to cruise up to Point No Point in the summer and find twenty or more mooching boats tightly packed into the soft eddy of the tide rip. They will be, of course, surrounded on the outside of the rips by a hundred boats trolling with downriggers. The number of Chinook caught off this point every summer and winter makes it earn its title as one of the best spots in Puget Sound.

Where is Point No Point, Pilot Point and Skunk Bay?

How to Fish Point No Point, Pilot Point and Skunk Bay

This is a very good area to fish on either side of the tide. If you are trolling with downriggers, trolling with the direction of the tide is important. Equally important is to stick with the bait. Search for where the tide rips are forming off Point No Point before you start to troll. These areas of diverging currents are very swirly and cause big tangles with your gear. There is usually a fair amount of eel grass on the surface near the tide rips, and I don’t want to troll through that.

Mooching and Jigging at Point No Point

Mooching and jigging boats will fish right near the tide rips off the Point No Point Lighthouse. The back eddy behind the tide rips near the Lighthouse can be surprisingly calm and the concentration of boats all working that back eddy can be impressive! Chinook and Coho Salmon will concentrate here as will large schools of Herring.

When I fish an incoming tide, I run up to Point No Point and stop just short of the tide rips. I will troll southbound along the 90′ to 150′ contour, usually close to the bottom. Depending on the stage of the tide, somewhere near Pilot Point you will find that the weeds will start to get thick again. I’ll pick up and run back to the Point No Point and start a new troll southbound.

Fewer people fish this area on an outgoing tide but it can produce some good fishing for Chinook. I will run past the tide rips at Point No Point and follow one of the contour lines North and West into Skunk Bay. There is a good amount of bait that gets pushed into Skunk Bay, especially when there is a big tidal exchange.

Gear To Use At Point No Point

I usually troll along the tide rips for Coho. Most of the time I will scoot out into the shipping lanes to find the best Coho fishing.

Beach Fishing at Point No Point

There is a public park at the Point No Point Lighthouse, and every year there are plenty of salmon caught off the beach. The water right in front of the Point is deep and casting metal jigs like Buzz Bombs, Point Wilson Darts and PLine Lazer Minnows can be good producers.