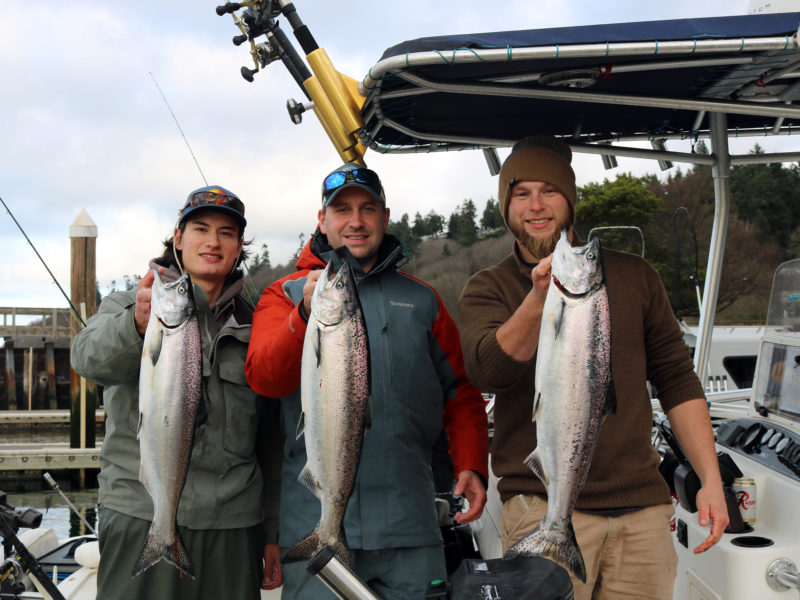 We had a phenomenal first day of 2020! Ringing in the new year right!

I rang in the New Year the same way as I did last year, with an early-to-bed-early-to-rise schedule so that my awesome crew could enjoy opening day of the Winter Blackmouth fishing season in Seattle’s Marine Area 10. The last time I had my boat out salmon fishing on Puget Sound was mid-September, and the excitement to hunt for Blackmouth has been building since then!

Mitch, Sean, Neils and I launched at Shilsole just after sunrise and headed out into a calm Puget Sound. The weatherman had us nervous for the days that led up to opening day. Gale warning for the day before, and a forecasted small craft advisory for the day of. But as usual, and especially during the winter, the marine forecast isn’t always 100% accurate. We zipped across the Sound at 30mph with a light breeze pushing in from the South.

Kicking Off With Some Trolling

We started fishing on the North side of Jeff Head, and started out trolling. I wanted to do a little experimenting and go a little out of our comfort zone. We decided that we weren’t fishing any flashers which is totally bucking the trend! Flashers are super effective, but they take a little of the fun out of catching salmon, because of the extreme drag they keep on the line when fighting a salmon. On one side we trolled with a 4″ Tomic, and on the other we had a cut-plug herring. Our trolling efforts had us zig-zagging around the entire North side, with nary a bite. Once the tide turned and started to ebb, we changed locations and tactics. Time for some good ole fashioned mooching!

My roots have been trolling, but over the last few years, mooching has become my favorite technique. There is nothing that beats hooking a fiery salmon with the rod in your hand. Feeling the bite, reeling fast to connect, then giving a quick set to drive those hooks home. Nothing compares to the battle on light drag on a boat that isn’t in gear! It’s true bliss!

Our mooching setup is so simplistic and effective… lightweight G Loomis IMX 8’2 1-piece 10-20# rod, Shimano Tekota 300LC Line Counter, 15 pound hi-vis mono, 3 ounce banana sinker and a 6′ 25# leader with a pair of 4/0 hooks. The most important piece is of course the bait, good-quality green label herring brined to perfection. Check out my brine recipe here. No secrets here!

Mooching for Blackmouth at Kingston

Our second stop was Kingston, just north of the ferry lane. I was loving the tide conditions, a 7′ exchange. I was loving the weather, a light breeze out of the South pushed us along as we drifted and mooched. I learned a few years ago that the massive schools of bait that we get excited about during summer season isn’t something you can count on during the winter. We started in 160′ of water and drifted north into 75′, doing our best to fish the entire water column. Although we weren’t marking much in the way of bait, I had as much confidence as ever that we were in the right spot. Our first drift confirmed that, there were Blackmouth around and they wanted to play. Out of the 30 boats within sight, can you believe there were only two mooching?! Unreal!

As the ebb tide really started to push outward, the fishing just got better and better for the next two hours. We hooked a keeper per drift and landed at least a couple undersized as well.

One of the highlights of the trip was a fish we didn’t even hook! Mitch brought his bait up to the surface and a ten pound Blackmouth circled twice before deciding not to play. One of the larger Winter Blackmouth I have personally seen (although I haven’t been Blackmouth fishing as long as many of you, our average has been 4-6 pounds). Still cool to see!

We ended up with 3 keeper Blackmouth before we used up the bait. I initially figured we would be trolling more today, so I only brought 3 trays of herring for the four of us… bad move! But we were very happy with our fish and ended the day in the early afternoon. My motivation to head out again soon is high, let’s hope the weather cooperates!

The Best Herring Brine Recipe in the Pacific Northwest